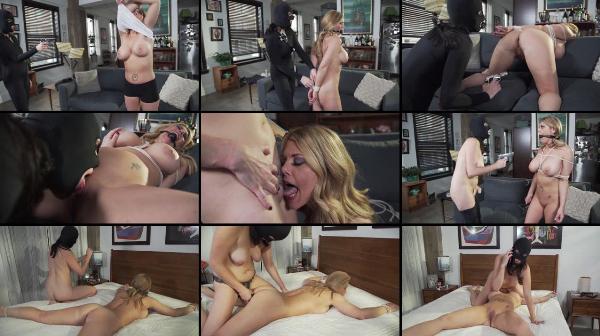 Carissa Montgomery & Dixie CometCat burglar Dixie thinks her tipoff to rob this house was a sham, until she finds a red thong stuffed in the couch. She takes a sniff of the panties and decides that maybe this tipoff won’t be a total loss. She waits until the owner gets home…big titted Carissa comes strutting in after a jog and gets confronted by an armed and masked Dixie. Dixie tells her to get her arms in the air and to not make a peep. Dixie hands Carissa a ball gag and makes her gag herself with it. She then forces Carissa to strip down completely naked. Dixie gropes naked and embarrassed Carissa’s tits and ass. She makes her more uncomfortable when she sucks on her nipples and licks her salty, sweaty armpits. Dixie ties up her fresh meat, chest ropes and wrists behind her back, salty tits and pits aren’t all Dixie is gonna taste!Dixie fingers Carissa’s pussy noticing that she’s a little wet and a little salty there too…she must like being held captive and being tied up. She forces Carissa to bend over the couch with her ass in the air. She gives Carissa’s juicy ass a few swats before diving in and licking her pink, salty asshole. Dixie controls herself and stops before Carissa cums. She makes her turn over to sit on the couch and Dixie goes right to tongue fucking Carissa’s swollen clit and devouring her pussy. Carissa moans into her ballgag as she thrusts her hips and cums on Dixie’s face.Now it’s time for Dixie to see just how worthwhile Carissa is for her to sell off. She forces Carissa on her knees, unties her wrists and takes out her ballgag. Dixie peels off her catsuit and makes Carissa eat her pussy until she cums. Dixie then gets in doggy and has Carissa get a tiny little taste of her asshole too before moving on to other things. She re-gags Carissa with the ball gag and ties her wrists back behind her back. Dixie applies a very tight crotch rope to Carissa as she begs to be let go. She fashions a leash out of rope for her fuck pet and leads Carissa into her bedroom for one last sexual encounter to seal the deal.Dixie has Carissa tied off to the bed spread eagle but laying on her belly and ballgagged. Dixie takes off her catsuit completely before spanking Carissa’s ass and making sure her pussy still wet. Dixie goes through her night stand, finds a stocking and proceeds to pull the stocking over Carissa’s face to mask her. Dixie puts on her stap-on and fucks Carissa’s tight, wet pussy from behind with her black cock until she is screaming in her gag from orgasm. Her little fuck toy has definitely passed the testCarissa is tied spread eagle and now laying on her back while Dixie is sitting on her face and making her eat her pussy one last time. As much as Dixie would like to keep her as her own…Carissa has nothing worthwhile in her house but she is worth thousands. She’s selling Carissa off to become a sex slave and has to take her to the safe house to prepare her for sale. She puts the ball gag back in Carissa’s mouth and puts the cat suit back on. She apologizes to Carissa but money is money and then leaves her struggling on the bed while she goes to get the car. (lesbian domination, bondage, dildo fucking, face sitting, strap-on, damsel in distress, forced stripping, groping, armpit worship, pussy eating, ass eating)More formats: mp4 mov wmv-hd
Category: LESBIAN DOMINATION
Related Categories: BONDAGE, STRAP-ON, PUSSY EATING, DAMSEL IN DISTRESS, ASS EATING

Star Nine & Chrissy Marie - Encased By Catwoman Cub reporter Chirssy Marie is itching for a promotion. Constantly passed over at work, she comes up with a perfect plan to get noticed - an exclusive feat...