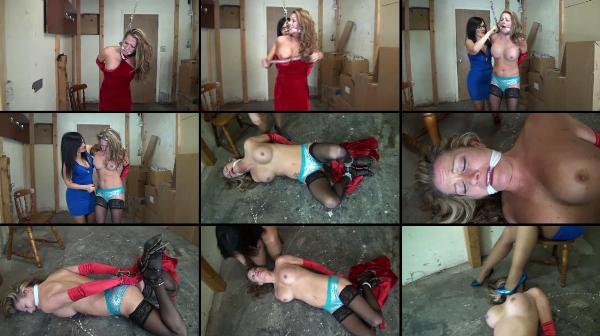 Busty blond superior court judge Allura Skye was still dressed the long elegant velvet gown she wore to the benefit last night. Even though she was over 40 and was a judge she still liked to show off her finely toned body and big tits. The last thing she remembered after leaving the party was getting into her car and feeling the shock of 500,000 volts flow through her finely lithe body. The next hour was a blur as her wrists were locked behind her back in steel police handcuffs and a rag was knotted between her teeth. She was brought to an old warehouse by the thug in a leather mask. The masked man locked a steel chain around her throat then attached the throat chain to a chain hanging down from an overhead eye bolt. Allura protested into her gag threatening him with jail if he didn’t let her go. But the thug ignored her protests and instead pulled one of her tits out of her gown and pawed at her tight little body. He then left her there handcuffed and chained by the neck to the ceiling. She had no idea why she was brought here as she struggled helplessly from the chain. Frustrated and helpless she pulls helplessly at the handcuffs all the while threatening and demanding to be freed through her gag. The she hears the door open behind her and looks to see me walk in. She demands to be freed immediately but I have other plans for her. I tell Allura that today is the day that my brother was going to be executed at the state pen and that Allura was going to suffer the same fate at the same time. Poor Allura pulls helplessly at the handcuffs finally recognizing me who she held in contempt of court the day my brother was sentenced. I vowed revenge that day and now the day has come to exact my revenge. But first I wanted to humiliate the haughty buxom blond judge. I reach up to undo the hook holding Allura’s dress on and I strip her of her long elegant gown. Allura stands helplessly in her panties, heels, thigh high stockings and gloves while I inspect my captive. I release her neck from the chain and push her to the floor. Allura’s ankles are then locked together in steel handcuffs. I attach her wrists cuffs to her ankle cuffs in a hogcuffed position. Allura begs and pleads with me offering her money for her freedom. But I don’t want money – I wants revenge. II leave Allura struggling on the cold concrete floor helplessly hogcuffed. I promise to return about the time my brother pays for his crime. Allura rolls around on the floor sobbing and crying into her gag. When I return I and sit on a chair by Allura’s head. I bend over and pull the gag out of her mouth and Allura begins to beg and plead with me, but I am not nearly finished humiliating the helpless buxom blond as I use her hogcuffed body as a foot rest. Allura is scared now when I tell her that her time is almost up. I press my high heeled foot onto Allura’s throat and begin to press down on her throat choking Allura. Allura struggles helplessly but there is no way to get out from under the stiletto heel press across her throat. I lift my foot and Allura coughs and struggles to catch her breath.I laugh and tell her that her time is up and I press my stiletto heel back into Allura’s throat. Allura pulls helplessly at the steel handcuffs but there is no escape. She can feel the sharp heels pressing deep into the soft flesh of her throat and the sole of the shoe pressing down on her trachea she can’t escape her fate.

Star Nine & Chrissy Marie - Encased By Catwoman Cub reporter Chirssy Marie is itching for a promotion. Constantly passed over at work, she comes up with a perfect plan to get noticed - an exclusive feat...