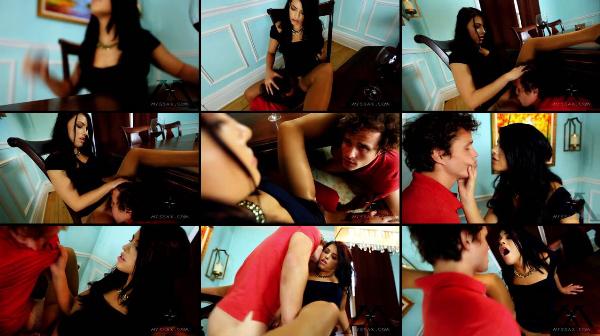 Ms. Chechik is the only single mother in the community and it’s easy for the haughty women in the traditional neighborhood to look down on a woman for living alone. She has a mysterious goddess-like beauty to her with her sparkling green eyes, her tanned skin, her raven black hair. It’s difficult for an exceptionally beautiful woman to make friends, and it’s taken her years to become respected, and more than respected, she has become a pillar of the community.

Robby is getting older and running around with the poor boys from the West Side of town. Ms. Chechik has forbid him to hang around with those trouble making boys but Robby thinks they’re so much more fun than the preppy boys who are only interested in golf and chasing uptight girls with coiffed hair and pearls. Robby has been pushing his mother more and more with his rebellion, bringing them into town, and there’s been talk abut drag racing and robberies.

Ms. Chechik went into the city to shop and the ladies were talking behind her back, the raised eyebrows and hushed voices were reminiscent of just 12 years ago when she just moved to Moorehouse. Ms. Chechik stiffened her spine and continued her errands when she saw her good friend Gloria who filled her in on the gossip. The boy has crossed the line with his hooligan friends and now everyone in town knows it. They say that “filth doesn’t rub off of the poor,” and they’re considering taking her off of the city council and planning board, the position that she worked so hard to earn. Ms. Chechik politely thanked her friend and went home to wait for Robby to return.

She has lived her life using her beauty as a tool to get what she wants from men. She started to learn how beauty can persuade men from her father, and throughout her growing years she knows that her exceptional beauty can control men to behave however she’d like them to. She needs her boy to behave. She needs to teach him.

MissaX – A Killer On The Loose pt. 4 – Aiden Ashley

MissaX - A Killer On The Loose pt. 4 - Aiden Ashley Sex scene between Aiden Ashley and Seth Gamble. Professor Peterson (Seth Gamble), sits in a dark, damp cell in prison. There's a killer on the loose...

MissaX – Aiden Ashley – A Killer On The Loose pt. 3

MissaX - Aiden Ashley - A Killer On The Loose pt. 3 Lovely Aiden kisses with the guy, blows his cock and he licks her pussy, fucks her in a missionary, cowgirl, doggy and sideways positiosns. The scene (sex...

MissaX – A Killer On The Loose pt. 2 – Kenzie Taylor

MissaX - Daddy's Bad Girl pt. 3 - Penny Pax, Brianne Blu Penny and Brianne are having a time alone. Both girls play with each other, sit on their faces, lick their pusseis, everything to please each other. ...

﻿ Hayliexo - Taking Care Of Sick Step-Sister Mom was supposed to take care of me but she left , Please come keep me company big brother. You're the best! I needed you to rub my stomach but I should've know...