Cub reporter Chirssy Marie is itching for a promotion. Constantly passed over at work, she comes up with a perfect plan to get noticed – an exclusive feature on a notorious villain – Catwoman. Chrissy locates and sneaks into Catwoman’s lair. Finding it empty, she begins to investigate – pawing through Catwoman’s dresser. Catwoman catches the intruder red handed. Chrissy mentions the expose, hoping to appeal to Catwoman’s vanity, but Catwoman is uninterested in helping Chrissy appeal to her misogynistic superiors. Instead of getting her story, Chrissy is turned into bait. The missing cub reporter will be an alluring case for The Bat. Fully encased in nylon and restrained by a series of leather belts, Chrissy pleads for release but Catwoman is unrelenting. She leaves her new bat bait to struggle against her bonds, clinching a vibrating wand into place before making her exit. 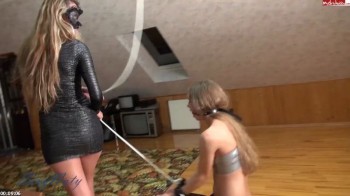 ﻿ SexyNaty - New Session - Lesbian Domination SexyNaty is tied up and gagged whilst Veneisse uses a number of toys on her. She inserts a pair of nunchuks in her ass, removes the gag and stuffs a large blue...