For the first time a duality of personalities battle in the Xtreme Arena. It’s the ultimate Wonder Woman battle as Reagan Foxx takes on the role of dark evil Wonder Woman, and new girl Raven Hart dons the traditional good Wonder Woman outfit. She climbs into the ring to face her nemesis. Reagan is already in the ring waiting in a robe, conceling her inner villain. Raven steps in and after some trash talking, Reagan does a twirl to turn into a super heroine. But, instead of the red white and blue, she becomes Dark Wonder Woman in a sexy form fitting black and grey Wonder Woman. Raven is surprised but does not back down. Can the pure and sweet Wonder Woman hope to compete with the dark side? Dark WW has brought her sex toys with her to torture and humiliate her foe. But who will rise to the challenge? Two super forces fighting and then forcing the other to orgasm after a fall is won? Sit back and enjoy this WW battle as it heats up quick!! Both vixens circle each other and lock up in a test of strength. It looks like evil is a bit stronger on this day as Dark WW forces Good WW down and into a body scissors. Good WW fights back though and does a bit of choking on the ropes. Of course Dark WW can’t help but cheat and starts to choke her adversary hard and rips her top off. Raven has an amazing set of tits and it becomes an attack point for pain. More crushing body scissors from Dark WW and now both super heroines rip each others clothes off. It’s a nude brawl from there on out and what a brawl it is! Boob smashing, chin locks, camel clutch, and more choking is employed by Dark WW and Good WW is in big trouble. Summoning all her super strength, she reverses the action and Dark WW finds herself trapped in a crushing reverse body scissors / choke with her arms pulled back. Huge beautiful titis and amazing pussies are on full display. There’s some great wrestling here but then Dark WW pulls out all the stops and starts to sex it up by licking her challengers pussy from behind. Fingering, deep pussy eating, and incredible Xtreme tribbing are used on the forces of good. She just can’t take it and knows an orgasm is impossible to avoid! Once Good WW succumbs to the intense tribbing and other sexual tactics, she has no choice but to concede the first fall. At this point Dark WW takes her prize and grabs a strap on from one of the ring corners and uses it to perfection. Missionary AND doggie style fucking rip more orgasms from the pure innocent WW. Shot in HD and Xtreme close ups that put you right in the action. This is Reagan Foxx playing her best evil WW and Raven Hart doing her best to compete, but falling to the forces of evil. Soon Raven wants more. Will we see her triumph over the evil Reagan in a future match? You bet we will, and that one will be coming very soon. This is a wrestling, fucking, tribbing, sexual romp, with beautiful women and incredible super heroine costumes! 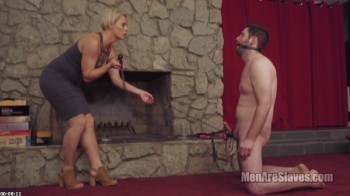 Helena Locke – You Don’t Get To Think Anymore, Part 1

﻿ Helena Locke - You Don't Get To Think Anymore, Part 1 Part 1 : Helena Locke is an intensely beautiful woman who is equally domineering towards the males in her life. So when a new pet comes along begging ...